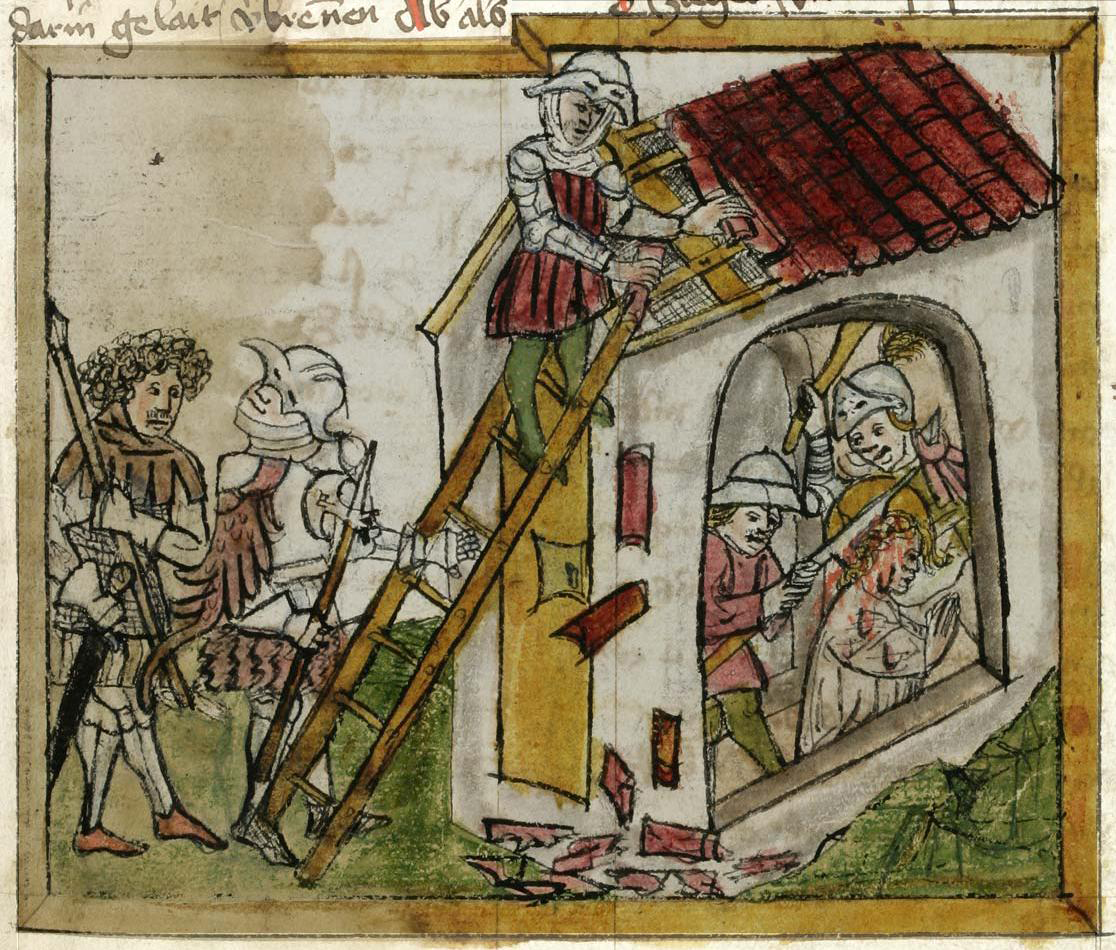 Halberds – And Other Types of Polearms

Halberds are a weapon with massive destructive power in armored combat. They were adopted by the Swiss in the 14th century and rose to prominence across Europe until armored combat died away in the 18th century. Basically, once introduced to the combat field, Halberds ruled supreme until guns showed up.

But Polearms… Polearms are any weapon used in armored combat where it can extend to fight an opponent in the “middle range”. Basically, just outside sword reach or to be used to extend the destructive power of a shield wall. The various types of polearms could be used to reach past the shield to inflict damage upon the enemy.

Halberds have various designs, but in general a halberd must have certain characteristics. It is essentially a combination of a long ax, pike, and bill. Specifically, a Halberd must have an ax shaped blade and a spike at the end to make it identifiable. It may have two ax blades or vary in terms of basic cosmetics. Usually a Halberd is made out of one solid piece of metal and incorporates both weapon characteristics. Finally, a Halberd is generally over 6 feet and up to 8 feet long.

In some circles, it is thought of as a ‘long’ Poleaxe. Halberds are often confused with poleaxes because the basic parts are similar. The main difference between the two is that Poleaxes are used by individual combatants with heavy armor and designed to not be longer than the wielder is tall. Halberds being longer and wielded by groups to inflict heavy damage in a group melee. Further, a poleaxe is often made of several parts and typically has a hammer head or spike head opposite the ax blade. Also, it may also have a pommel or spike at the bottom.

Bill – The hookiest of Polearms

The Bill is also a close cousin to Halberds with a single big difference. It was adapted from an agricultural Billhook and had a hook shaped blade on one side. It was designed specifically to pull on people and things when available. The Bill was good for dismounting riders, pulling on shields in a shield wall and hooking people’s feet to trip and pull them down. The English Bill generally has a wider head while the Italian version is more sleek in design with a greater angle to the hook. The bill is often confused with Halberds as they are both middle range polearms popular in the middle ages.

The Battle of Flodden in 1513 essentially pitted the Englishman’s use of the Bill against the Scots and thier Pikemen. And, it was a major victory for the English and the use of Bills. This battle solidified the English monarchies use of the Bill for years to come. It also happened to be the last battle in which an English King was killed. King James the IV was brought down by arrow and pike while making a charge.

History of Halberds and Halbedeers

The oldest halberd heads have been found to be dated back to ancient Sumeria or Akkaddia. While the exact history is difficult to pin down, halberds were used in various forms across all of the ancient world. The use of Polearms and middle distance weapons (something to attack where a sword won’t reach and a missile weapon is ineffective) has been around since people began to organize and create armies. If you look at the history of the Polearm, you will find the origins of Halberds. So for the purposes of greater understanding, we’ll lump them all together to start.

The earliest renditions of Polearm weapons date back to Ancient Sumeria and Akkadians. In the late second century BC some Sumerian stone carvings depict people holding what appears to be a halberd style polearm. They appear much shorter, but there is additional evidence to support the use of a long ax or halberd style weapons from archaeological digs in the 2000’s.

The Thracians and Dracians used a weapon called a Falx. It is essentially the same as an English Bill in design because it is a Polearm with a large hooked blade at the end. The smaller version was a sickle blade. But, the two handed Falx was essentially an adaptation of a farming weapon just like the Bill was too. The Falx was later adopted by the Roman armies of its time.

The Chinese had the Ji. Then there was the Danish Ax, the Sparth Ax, the Glaive, the Voulge, the Svaarstad, the Woldo, and many other Polearms in existence that all predated the Halberd. So, to say the Halberd appeared out of thin air by a grand idea is silly. It was simply a Swiss adaptation of the Polearm weapon. Other websites on medieval weapons falsely state that the Swiss invented the Halberd, this is false. The Swiss employed Halberds and Halberdeers in a method that was extremely effective and later adopted by most European armies during the 15th century. Due to the simple construction and durability of the design, it essentially became the last standard bearer of its kind.

Below is a general diagram of Halberds and other types of Polearms and how they were developed throughout Europe between the 13th and late 18th centuries. This diagram shows that Halberds were essentially an adaptation of the Berdiche or Long Ax, Bills were developed independently and adapted from the agricultural Billhook. Other polearms were adaptations of early spears that either had purposeful changes or ornamental changes made to their overall design.

The Halberd gained prominence because it was tough, simple and very effective. The weapon was also used by men behind shield walls or in semi protected positions to give deadly strikes down on to the head and shoulders of an enemy. It was, in fact the last of its kind. Halberds were the ideal weapon because they had the point of a spear that allowed the wielder to pierce armor. Also, it had the bottom side hook of a Bill to pull and grab shields or dismount calvary. Lastly, it had the blade of an axe that allowed them to swing and strike down upon a forward shielded foe.

What is the advantage of using Halberds or other types of Polearms?

During modern day reenactment fights such as The Battle of The Nations or in HMB or IMCF Buhurt matches, Halberdeers are utilized in mass battles to effect damage on the opponents from behind the front line. The advantage of their use lies not in one on one combat, but in mass combat. Also, in times they were used on real battlefields, Halberds and other types of polearms were quite effective for dismounted soldiers to fight against calvary.

Halberds allowed in IMCF or HMB

Halberd head designs dating from the 13th and 14th century are generally accepted. Later designs had a much more pronounced spike at the end and would pose a significant danger to participants in the sport. The current HMB rules explicitly state: • two-handed: halberds, glaives, poleaxes and similar weapons (with a total length of more than 1,400mm) – up to 3,000g. IMCF rules on this subject are the same.