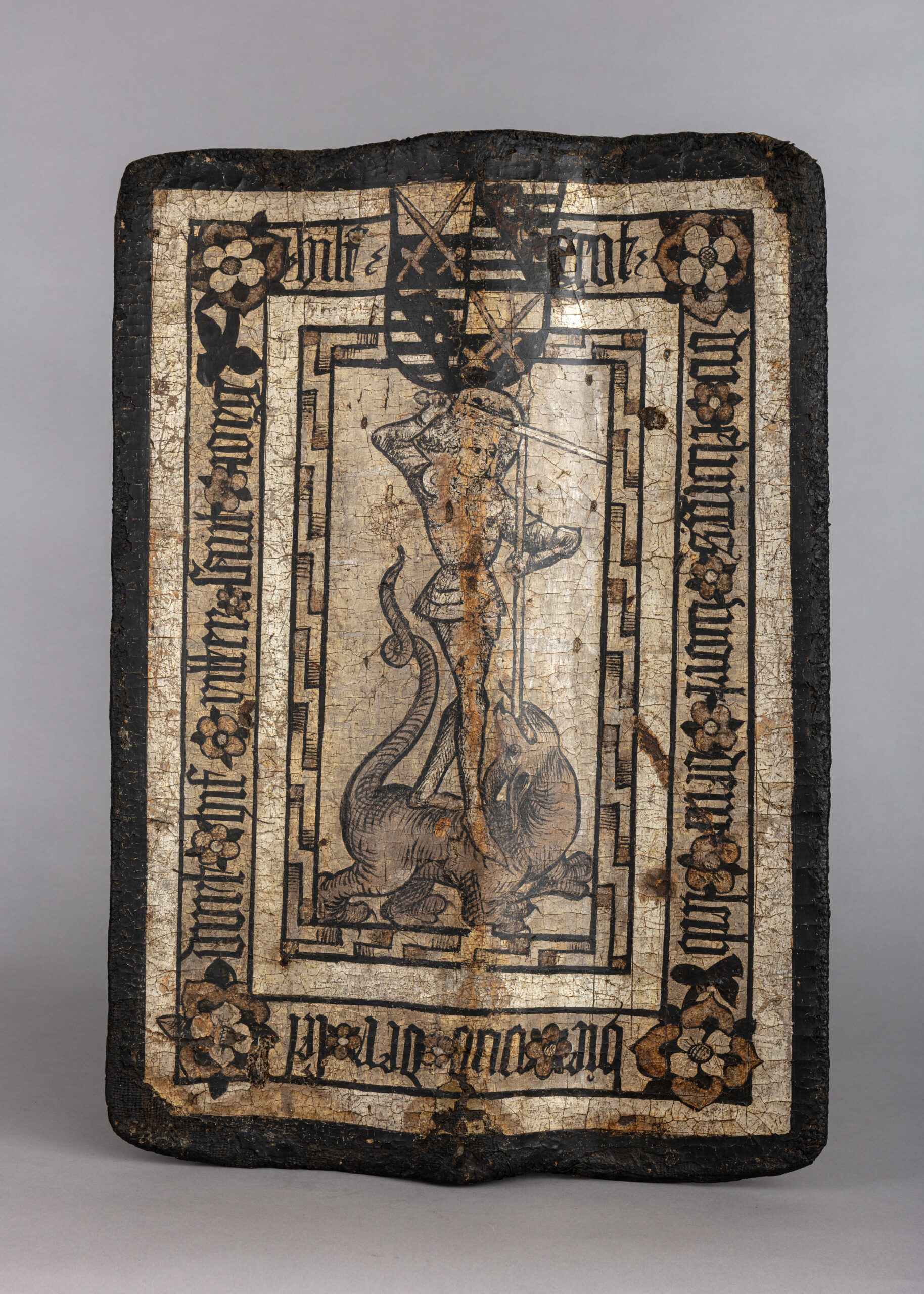 MEDIEVAL SHIELDS OF ALL TYPES

Talking about medieval Shields is a lengthy subject at best. But there are a couple of shields that stand out through history and are actually used today in modern Buhurt events.

What is a Medieval shield?

By the simple definition a shield is ” a broad piece of metal or another suitable material, held by straps or a handle attached on one side, used as a protection against blows or missiles. ” Although a medieval shield would fall into any shield used/developed from the 5th to the 15th century. This period of human history saw relatively little growth in terms of technology. So, many of the shields and weapons used did not change a lot over time. In this article, we will focus primarily on European, Germanic and Nordic shields. These had very specific designs and are easily categorized.

To put it simply, there are three; small, medium and large. This is to say that shields were built for primarily three different reasons. Small shields such as bucklers or hungarian punch shields doubled as weapons. They provided minimal defense and moderate level of additional offense. They had to be used strategically and with a great amount of skill.

This is a small round shield typically 16 inches or less in diameter that is made exclusively out of metal. It is fairly heavy for its size and provides the user with a moderate level of defense when used correctly and the ability to use the shield as an offensive weapon by striking their opponent with it. A buckler grew in favor for acts of hand to hand combat vs. a grand melee or group type combat.

A small shield developed in the Scottish highlands. This shield was round, up to 2 ft in diameter and was generally constructed out of leather covered iron or iron plated wood. Typically a targe was carried on the arm by two straps and used most frequently by the Scottish foot soldier. There is no reference of it being carried on the back with the use of a guige. This shield was famously brought into battle in 1746 during the Battle of Culloden. Scottish Highlanders charged against an English line of muskets. The Targe soon got a “T” added to the end of it and was simply known as a TARGET. It was the last time the shield was used in a battle.

The origins of this shield have not been nailed down just yet. But, there is a 15th century German Manual of Arms called the Gladiatoria Fechtbuch depicting the Shield and making reference to it. It is believed this manual was written around the year 1435 and therefore qualifies as a medieval shield. Most information available today does not specifically show the shield in the manner shown in this text with a hardened metal point on the front of the shield. But, it is known this shield type became very popular with the Hussar and also with mounted calvary units of various countries. The shield took on a slightly different design and was great for moving and blocking saber strikes. The modern punch shield used in Buhurt will be discussed later.

Probably the most iconic medieval shield out there. This shield got its name from the English because of the shape. It is shaped like an object used to heat and flatten clothes… An iron, or “heater” as it were. So it is known as such to this day. The heater shield was widely used in the 12th century because it worked well with sword to sword combat and was very useful for infantry soldiers. The shield was a perfect size to keep mobility and provide a strong defense. But, with the development of better and better plate armor, such a shield became less useful.

Since the Heater Shield also had a wide surface area and was common among every level of society and among armies. It also was used to display a coat of arms and heraldic displays. Even though the shield saw a sharp decline in necessity, it remained as a means of display for years to come.

The first renditions of it have been noted in the late tenth century. A common thought/theory is that the Kite Shield was an idea inherited from the Vikings. Although Spain and the Christian Roman empire also show the Kite Shield early on. No one can say for sure where it originated from. What is known is that the design was adopted by many peoples because of its effectiveness in mass battles. The shield was long enough to plant in the ground (like a Pavis discussed later in the article) and used to defend armies from missiles and bladed combat. The shield lost favor to the Heater Shield in the 13th century. Battle favored the nimbler soldier and Kite shields provided less protection overall because of their traditionally narrow design. The most common depiction of the Kite Shield is in the Bayeux Tapestry.

This shield is somewhat of a knock off of the Roman Scutum shield. There are key differences though. The Scutum was designed to be light weight with a metal reinforced center piece for punching/striking. The Pavis on the other hand was heavy and designed to be set as a stationary shield for archers to hide behind. This shield was used by many lords, nationalities and countries over several hundred years. It provided invaluable for long range defense.

Where can I get a Medieval Shield?

Well… A LOT of places really. If you want one that is an actual antique, that’ll cost you in the millions from a black market antiquities dealer. But if your taste is more modern and you want one that can actually be used in reenactment sports and actual armored combat sports then many armorers around the world make them. There are places like Medieval Extreme, or other places like Master Uley in Ukraine and even in the USA there are quite a few garage armorers that know how to make a traditional kite shield or punch shield.

Many of the shields now are used in the HMB or IMCF or even the SCA sport events. They have to meet strict historical requirements and also be able to pass the safety requirements of the various sporting groups. I have a ton of information about that HERE.

What Medieval Shields are allowed in Buhurt?

All wooden, wicker or leather shields or metal shields should be made only on the basis of reliable historical analogues and correspond to the form of the analogue in all three planes. A shield can only be used with a set of armor of the same epoch and region. 1.3.2 The edges of all wooden, wicker or leather shields are to be trimmed with 2mm or thicker leather, rawhide or three or more layers of fabric attached with glue. The edges of metal shields shall have a rolled or rounded edge with a minimum thickness of 4mm throughout. 1.3.3 The weight of any shield shall be less than 5 kg=11.03 lbs. 1.3.4 Metal handles are not allowed on shields excluding small center grip shields commonly known as bucklers.

The edges of shields are to be trimmed with thick (no less than 2-4 mm) leather or three or more layers of fabric attached with glue or adhesive agents. 2.2.3. Edges of the iron shields have to be carefully forgerolled and be no less than 4 mm thick.

Of course, all shields for HMB must meet their strict authenticity standards and not be used outside of a 50 year range of your current armor set.

Check out this article to learn more about what is burhut.