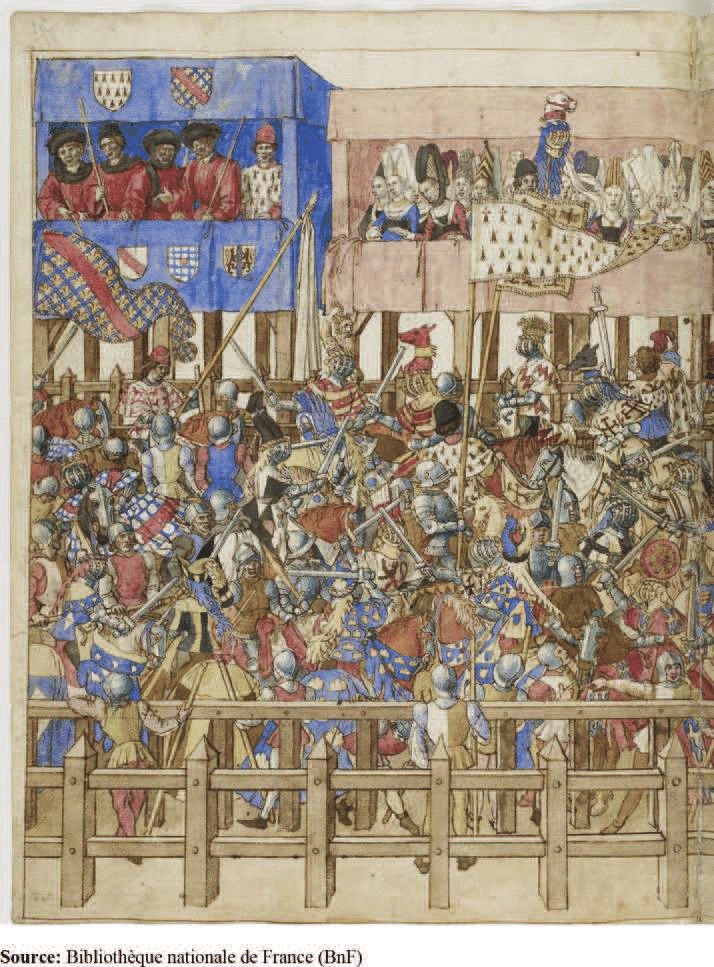 Buhurt is colloquially thought of as; the art of using weapons to smash other people in armor… In a group setting. At the time this article is being written, there actually isn’t a legitimate definition for the modern form of it. Historically there is a lot to say though. But, those who do it and participate in it know exactly what Buhurt is.

What is the History of Buhurt?

The word Buhurt actually comes from an old French word ” Béhourd “, which literally translates to “wallop”. The origins from it come from wondering what to do with a bunch of knights that have too much time on their hands. Officially the term “Buhurt” itself is actually recognized as a combination of words from the middle ages. In the original competitions in the late 12th century, it was referred to as a “melee” The English eventually overtook the word and referred to it in actual combat terms.

But, if I were to get scholarly on you, Wikipedia says this: ” The melee or buhurt was the main form of the tournament in its early phase during the 12th and 13th centuries. The joust, while in existence since at least the 12th century as part of tournaments, did not play the central role it would acquire later (by the late 15th century). “

To dive more into the history of Buhurt is more of a journey into what it meant to be a knight during a time that knights were something quite special. A skilled knight might travel from tournament to tournament during this era to make a small fortune. It was often the hope that a knight would find a lord to permanently conscript him and thereby securing his future.

There are historical tales of an old knight and a younger knight that traveled across England winning tournaments for a period of ten months and defeating over 100 other knights. (circa 1177) Being a knight in this time frame was essentially being a super soldier or pure weapon of war that was highly regarded. For example, the pride and centerpiece of knighthood was their horse, and a prize warhorse would cost as much as a common skilled worker made in thirty years of work.

The idea of grand melee combat (buhurt) lasted from the mid 1200’s until the 1340’s where it was finally snuffed out. The last tournament was in 1342. That one was arguably snuffed out by sheer boredom since terms of it were debated into the evening and it didn’t actually start until after dark (or close to it). Ultimately, kings and lords had varying opinions on group combat tournaments because of the expense and expected loss of life with knights that could be used for ACTUAL war. Needless to say, the Buhurt died because it was resource heavy and provided no real benefit to the people putting it on. I suppose corporate sponsorships and advertising weren’t a thing back then.

What is Buhurt today?

Buhurt or sometimes spelled Bohurt is pronounced in a myriad of ways depending on where you stepped into the sport. Unlike its pronunciation, it is practiced with very universal rules. Currently, there are two primary arenas this is done, the IMCF (International Medieval Combat Federation) and the HMB (Historical Medieval Battles).

The original groups to bring it back were from the nations of Ukraine and Russia. It started in reenactment groups and eventually took on a larger audience. Poland and Belarus also participated in many events early on in the sport. This is why in these countries, Buhurt is VERY popular. It is now quickly becoming a worldwide phenomenon.

The rules are designed to keep historical context and players safe. Also, there are some rules to keep the sport itself moving. For example, in the IMCF, competitors are not allowed to grab the edge of the arena (the rails of the list) in order to help themselves stay up. This has been allowed (and still is allowed in HMB combat) in the past and many have found that it slows the sport down and can also make the person doing it susceptible to a badly broken arm.

Regardless, grabbing the rails can be a major advantage when properly used. It not only helps with keeping yourself upright, you can use it to help toss opponents to the ground. But, as in any sport, a rule such as this is bound to have people arguing for both sides of the coin.

This is what Buhurt is to some people:

What kinds of weapons are used in Buhurt?

Most of the common weapons of the 13th century are allowed. Maces, Axes, Halberds, and Swords all enter the arena. The edges must meet specific safety requirements and the weights must not exceed those safety requirements either. Neither of these things takes away from the brutality of the sport and the need to wear very good and very strong armor. A good axe swing will easily cut through cheap steel regardless of how blunted the edge is. A list of specific weapons and weapons requirements can be found in another article HERE.

The thing to remember about the weapons used in Buhurt is simple. Ask yourself the following questions (and they need to be a YES as an answer) Did they exist during the 13/14th century? Were they commonly used in combat and depicted or described in historical text? And finally, can they pass inspection? An inspection happens at every tournament for weapons to be used. They must be certified by Marshall’s for historical accuracy and safety.

What kind of Medieval shields are used in Buhurt?

While there are a great many types of shields allowed in the list (arena) there is generally only two that are used. First is a Hungarian style shield often called a punch shield. it is somewhat kite shaped and held by two straps on your non-dominant arm. The other type of shield commonly used is a buckler. It is small, heavy, and also packs a wallop when used as an offensive weapon. Both shields allow combatants to grapple, fight and perform very offensive operations.

Other shields tend to be cumbersome and can be used against the wielder in due to the nature of the sport. A full list of Medieval Shields is in another article HERE. There you will find the origins and time frames of all the different Medieval Shields.

Where can I do Buhurt?

Well, that’s tough. The sport is bigger now than it has ever been and there are opportunities in lots of places. Unfortunately, the clubs are still far and few between. But don’t lose hope. A little bit of travel goes a long way. And because the sport is growing so fast, there may actually be a club in your town.

The two major players that put on events around the world are the HMB and the IMCF. Both organizations have similar rule sets with minor differences. The only major difference between the two is the adherence to historical accuracy that the HMB carries. Competitors go through a much more rigorous check on their armor with respect to accuracy vs. the IMCF.

If you live in the PORTLAND OREGON AREA, you can always sign up on the contact sheet and get regular info about the club there. They also have a Facebook group, like many of the other clubs. Don’t be shy, reach out and find out where you can either join the sport or at least go watch people battle it out in teams!